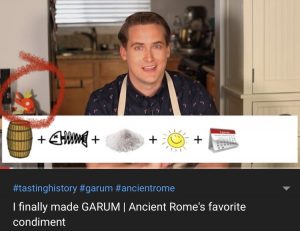 Yesterday I might have claimed as a mental health day, but anyone who’s met me knows that’s bat shit crazy talk and besides we’ve been taking the day off since mid-March.  Found this incredible YouTube channel called TastingHistory with Max Miller, where this really hot guy not only makes ancient foods, he gives us the history involved.  Warning:  These are seriously-addicting, which is why two loads of laundry were put on the line and the rest of the day went to hell.  I’ve linked to the Buttered Beer video, but every single one of these is fascinating.