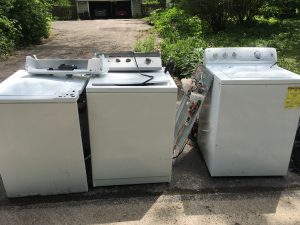 The GE was the POS we bought after the 2013 flood – motherboard fried 14 months later, replaced it and the motor died after two loads.  Bought a used Maytag from an appliance store on South Ashland which worked great for years.  FirstBorn’s friend had just replaced the motor on his mom’s Whirlpool, who then decided she wanted a new one after all; got at least six+ months until it died.  Hit Best Buy yesterday and took a Whirlpool off the floor; trying heavy duty cycle today for funsies … over 3 hours and still not finished.  Damned energy efficient appliances!  Never use THAT cycle again, along with the clean your washer setting 🙂

Point of this post is that I’ve been trying to get household members to move the old stuff out of my laundry room for a century and it finally happened.  Looks like a Sanford and Son reboot, but the junk guys are gonna be doing the happy dance.