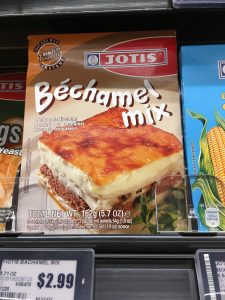 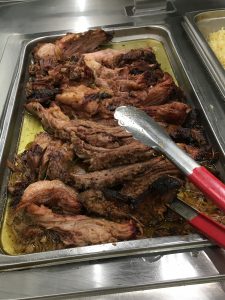 Pita and I used to stop at the Pete’s on Roosevelt in Glen Ellyn – the old Dominicks location off Rte 53 – on a regular basis, but 2020 broke the habit and now it’s infrequent.  A shame, because their salad and prepared meals bar has not been topped by anyplace else imo and shockingly enough, the prices haven’t moved up much since those days.

The Halal bar was only $9.99/lb and the cerviche bar was $10.99 – everything else was $8.99.  Cerviche shrimp are huge and it is definitely cheaper to buy already prepared than DIY.  I mix and match from several varieties, so the finished product has shrimp and octopus.

Okay, why would anyone pay $2.99 for a béchamel mix?  Obviously there’s a market out there for people who don’t know that béchamel, one of the five mother sauces, is only flour fried in butter (a roux) into which milk is slowly added.  It’s a sauce we are all familiar with from mac & cheese and chicken pot pie.  Velouté is another mother sauce made with the same roux, but you swap out milk for broth.