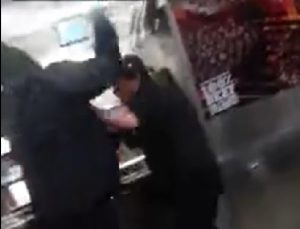 You don’t seem to see things this like happening at McDonald’s or Wendy’s. But something about Burger King appears to send coupon users flying into a rage.

An Iowa man has become the latest in an increasingly long line of Burger King customers arrested in connection with a coupon-related confrontation. And this one was caught on camera.

Police in Cedar Rapids say 34-year-old Jeremiah Wenzel was arrested last Wednesday, accused of hitting a Burger King employee in the head with a cell phone. “The suspect allegedly attempted to use a coupon but the store didn’t honor it,” police spokesman Greg Buelow told Coupons in the News. “He became upset and threw his phone at the employee.”