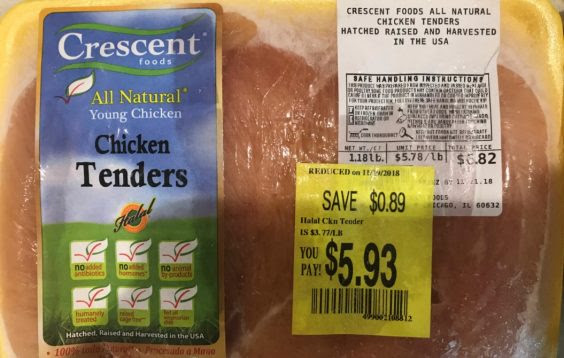 Bargain-hunting grocery shoppers know you can often get a good deal in the meat department by looking for clearance-priced packages nearing their expiration dates. But how often do you do the math, to make sure you’re getting as much of a bargain as advertised?

One Florida man who took a close look at the clearance price tags at Walmart concluded he wasn’t getting much of a bargain at all – so now Walmart has agreed to a nationwide settlement that could reimburse him, and shoppers across the country, millions of dollars.

The proposed settlement comes just over a year after shopper Vassilios Kukorinis filed a federal lawsuit, saying that the unit prices and sale prices of meat he purchased at Walmart didn’t match up. From at least February 2015 to the present, he claimed, Walmart “advertised false unit prices for weighted goods placed on sale close to their respective expiration dates.”

Consider the package of chicken tenders that he bought in 2018 (pictured above). It weighed 1.18 pounds and sold at a unit price of $5.78 per pound. That made the original selling price $6.82. When the expiration date approached, Walmart put a yellow sticker on it, reducing the unit price to $3.77 per pound. That should have made the selling price $4.45. Instead, the “sale price” was $5.93.

Kukorinis might have just written it off as an isolated case of bad math. But over a period of several months, he visited a dozen Florida stores and said he found similarly-mispriced packages of chicken, fish, beef, pork and other weighted products. He and his attorneys investigated further, and said they “identified these pricing practices throughout the United States, including multiple stores located in California, Georgia, Illinois, Louisiana, and other states.”  Here’s the interesting article from Coupons in the News.