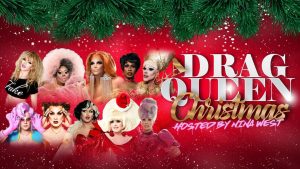 Every holiday season something magical happens with your favorite queens from the Emmy Award winning television show RuPaul’s Drag Race on VH1. A Drag Queen Christmas is coming to town with an all new show and new cast hosted by Nina West. Now in it’s fifth year, The Naughty Tour is a fan favorite during the holidays. Get ready for amazing costumes, killer performances, a new stage production and all the outrageous and hilarious shenanigans at the Vic in Chicago.  This is a one-night only performance on December 2nd and tickets are half off box office prices (plus service fee).