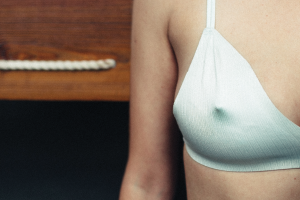 When your look needs a little extra je ne sais quoi, top it off with a pair of Just Nips stick on nipples.  Wear on top of bras or directly against the skin.  Comes in two varieties – Cold and Freezing – and a pack of two is $9.99.  Made in Michigan with fake pearls; GMO-free.

This FirstJob site is aimed at college students and recent grads looking for an entry level job or internship. Yeah. I got me one of those. Maybe you do too? Maybe if they find a job they’d move out… or at least start paying rent!

By popular demand, you can now subscribe to deranged.me by email. Just fill out the form and then click the verification link it sends you. Every evening you’ll get one email with all the posts from the past 24 hours.  So you don’t miss any, because that would be a tragedy.

which has overtaken that puny one in China… 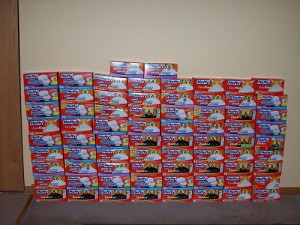 This reader plans to donate most of the bags.  I am in awe of your resolve, people!  I gave up after nine boxes ’cause SC was giving me the stink eye – I mean, he knows we don’t generate that much garbage… 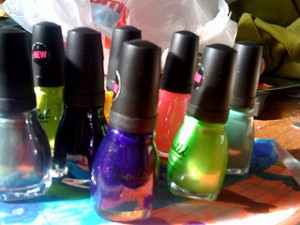 Picked up the nail polish at CVS where it’s on sale this week for 99¢.  Use the $1 coupon from 5/13 rp on ANY Wet & Wild product for FREE nail polish.  Walgreens also has displays of the Wet & Wild products which inlcudes eye colors, polishes, mascaras that are normally $1.99, but now are selling for 99¢.  So FREE makeup.  Note that not all inserts carried this coupon – we found it in the Trib and their Deals Delivered subsidiary, but not in the Sun Times.  Don’t worry if you don’t see the polish color you want at CVS – get a rain check ’cause the coupon is good for weeks. 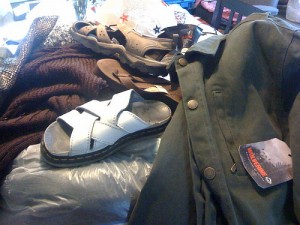 What’s better than a garage sale full of “stuff?”  NWT stuff.  We’re talking Vicky’s Secret, Wolverine, Aerostopole, Structure, high end lines from Kohl’s…used stuff was J. Crew, White House/Black Market, Doc Martens…lots and lots of goodies to sift through.  It’s been going on for a week – should have stopped by earlier! 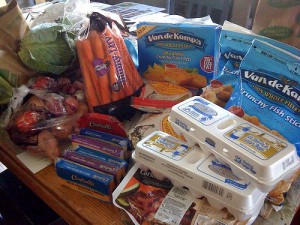 Happy St. Patrick’s Day!  I’m going to give you a rundown of what I purchased for $30.75 at Ultra and compare it to the same or comparable items at Jewel (sorry, Jewel, but you’re gonna lose big time):

Centralla cheese blocks were 99¢ – I used a rain check from last month.

The corned beef, cabbage and eggs along would have been almost $6 more this week at Jewel – I can’t say what the difference in other things are, although Jewel has their green grapes on sale for $1.28 and they’re 88¢ at Ultra.  This is definitely the week to be at Ultra, although it pains me to say so…

Seriously now…does any Jew dress up like a rabbi, Moses or Esther for Purim?  This is one of the most ridiculous excuses for a sale I’ve yet to see.  Only good thing about Purim is apricot and/or poppy hamantash … and obviously this mask/wig combo.

Meant to run this a few days ago, but hey, better late…

I always advise shopping the stockpile but it’s a hard habit to get into.  We’re programmed to pick up something on sale at the grocery store and maybe use a couple of boxes of GG frozen vegetables for a side (which we delude ourselves into thinking is stockpile using – it’s not).  So every once in a while I’m going to make dinner completely from the stockpile.  Admittedly I have two upright freezers, two refrigerators and a full basement, so it’s a trifle easier than pulling cans out from under a bed. 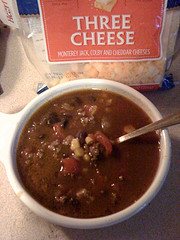 This is black bean chili.  It consists of four pub burgers browned in Wesson oil, three cans of black beans, 3 cans of Hunt’s fire-roasted tomatoes, 3 cans of Libby’s kernel corn plus plus salt, chipotle powder and several onions from last year’s farmer’s market – the Kraft cheese crumbles were offered as topping.  I made enough to fill a huge cast iron dutch oven, which made for a nice dinner, some lunches and late night snacks.

Bottom Line Cost:  Pub burgers were free; Wesson oil was from the last great cat deal at Jewel (50¢ bottle); Bush’s black beans were 25¢ on the clearance cart, but I used L’Oreal hair color/coupon overage to bring that down to zip; Libby’s corn was free from the DG deal 11/10; Hunt’s tomatoes were from the good old days at Jewel, so maybe 75¢; Kraft cheese was about 50¢ worth. By this point you’re almost compelled to include the cooking gas just to get up to a buck or two!

Finally sat down to watch Season 3 of Extreme Couponing.  This time around it’s a battle between two coupon “superstars,” Carla and Faatima (you might remember her as the large family from Detroit who want to move to Hawaii and ship their stockpile…which would be the cheaper part of their airfare, if you catch my meaning, if you get my drift).  These two women have been couponing for maybe a year (insert woot here) and they know it all.  So this season the idea is to pit two of these self-proclaimed couponing queens against each other to spend at least $500 with a minimum of 16 different items purchased; winner is determined by how large a percentage is taken off the total through coupon usage.  All groceries purchased are donated to charity and the winner proceeds to the next level with the final prize being:  The Golden Shopping Cart.  i kid you not… cue willy wonka music

Barely half-way into the show and PITA’s saying “why are we watching this?  It’s boring.”  And I can hardly answer between yawns.  Yes, it’s that boring.  Both are shopping in double coupon stores, which only pisses me off, frankly.  Even without that bit, though, I’d have to say two thumbs down ’cause it’s boring as hell – I’d rather wash my kitchen floors.. 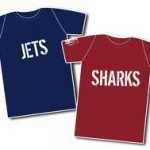 You know how some places have lock downs for weapons or drugs or open gang warfare?  Lisle High School officials found a threatening note in a school office.

District 202 issued the following statement to parents at approximately 1:30 p.m.:

“On Thursday, Jan. 12 at approximately 11:40 a.m., Lisle Senior High School personnel found a note containing a concerning message in an office within the school.  In consult with the Lisle Police, the situation was immediately assessed and common areas in the building were searched.  At no point were any students or staff in danger.  The building was placed on lockdown as a precautionary measure and a corridor was established to ensure the safety of the students and staff.  Members of the Lisle Police Department and Du Page County Sheriff’s Department worked with school officials to investigate the matter and it was determined that the note was a prank.  The school returned to normal daily schedule at approximately 1 p.m.  Dismissal time will remain unchanged and all events scheduled for tonight will take place.  The Lisle Police will continue to work with school officials in investigating this matter.  Our commitment will always remain first to the safety of our students and staff.”