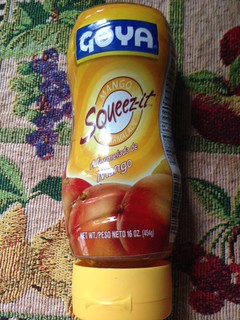 Just opened this squeeze bottle of mango preserves I found on my basement shelves and couldn’t figure out where it (and the Goya guava preserves next to it) had come from until I remembered:  Dominicks closing clearance.  FYI, expiration date is August 2015!

I miss Dominicks!  If the Jewel weekly ad gets any duller it’ll be registered as a sleeping aid. 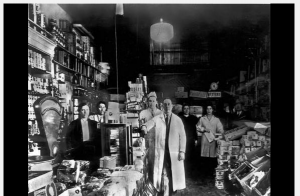 The stores, located in Northbrook, Arlington Heights, Des Plaines, and Elk Grove Village, were taken over on January 25, with plans to renovate and reopen them under their new banner beginning this spring.

A 25-year-old, family-owned business, Joe Caputo & Sons Fruit Market is doubling its reach with the acquisition. The independent grocer is affiliated with Chicago-based supermarket network IGA, and currently operates stores in Palatine, Des Plaines and Algonquin.

The Northbrook and Arlington Heights stores are scheduled to reopen by late March or early April, with the Elk Grove location opening soon after that, according to the company. The Des Plaines store is expected to open by the end of the year and will supplant the existing location in that suburb.  Read more here. 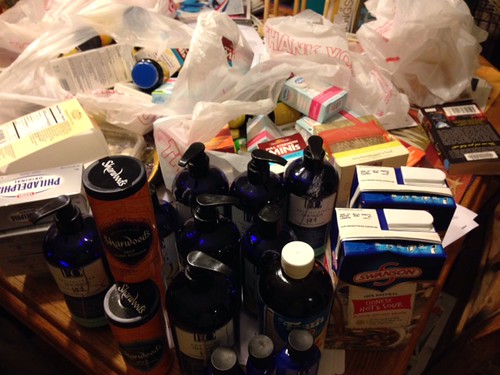 Meaning the staff of the Downers Grove store were all working at the Aurora store!  Was talking on the phone when up walks the asst manager, who says “Where’ve you been?” I was shocked.

Couple of more bags rather hidden, but here’s the gist:

The EO lavender-scented conditioner I bought yesterday was so good that I and took all remaining EO products.  Picked up fancy-schmancy teas (in hand-sewn bags, no less), homeopathic potions and pills, Indian spice blends and 22 Nature Made vitamins and supplements, using 22 $5 coupons, which covered most of the foregoing costs!   OOP was still nasty, though:  $55.

Print and use the Extra gum coupons at Dominicks – they have PLENTY of Extra gum hanging around for about 35¢ a pack – go for some puny overage; the Nature Made gummies may or may not be around, although they certainly had plenty at the Aurora location!  And if you’re going to be printing anyway, here’s a couple of dry dog food coupons.

Stack this $1/2 Target store coupon with the B2G1 mfr coupon and the 10% off DiGiorno Cartwheel offer.  Use your REDcard and pay 5% less. 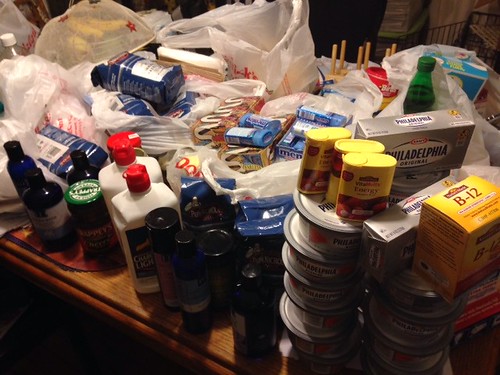 Many more bags on the floor, mostly Nature Made vitamins for which I used $78 in coupons and tremendous overage (I happened to have my stash of pdf coupons). The Wall of Cream Cheese at the Eola location included the salmon variety. Rachel gets a few, together with the Mentos gum and the cream cheese bricks. Got ten Papa Nicholas cinnamon hazelnut coffees for $2 each and lots of EO products. More smoked gouda (50¢ each?) and two cartons of the Stride gum Loverboy and Mom flavors.  Shopper was looking at them and I mentioned the name. She said it was a nice idea for Mother’s Day (which, frankly, had not occurred to me). I said I thought it would be weird to ask someone how your Mom tasted. She looked at me funny. Some people are just strange.

Still spent $145 OOP.  Ouch.  My coffee stockpile is now rivaling Rachel’s!  I also grabbed four more boxes of 60W incandescent bulbs, since they’re turning into a collector item (I only have one fixture that still uses them – the rest are CFLs).

What’s still in stock?  The following were in sufficient quantity to predict they’ll be there tomorrow…

Lots of vitamins and supplements, both name brand and Safeway.  Lots of cream cheese, regular, bricks, lite, whipped and some salmon.  Lots of candy and gum.  CD packaged in bags.  Lots of pet products (shampoos, flea and tick meds, collars, etc.) including Hartz bird seed mixes.  Many more produccts than at the Westchester location.  My guess is this store has/had a large ethnic customer base because there were quite a few Hispanic, Kosher and Indian products.  Person in line ahead of me had many bottles of wine, but I didn’t wander into that section so don’t know what they have.  I picked up many artisan items that I would have passed by even a few weeks ago – like the EO stuff ($13+ shelf tags!).  A few months ago Dominicks started carrying this line of majorly expensive organic socks & tights for children – they were something like $12 or more for toddler tights.  I picked up a few pairs (and tie-tied socks) for about a buck each.

Please make sure to always check expiration dates on your cans and jars – hell, check ’em on everything!  I had quite a few jars I put back with 2012 dates… 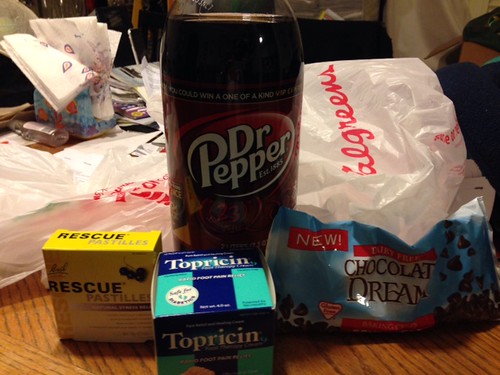 Westchester Dominicks (Wolf and 31st) is still open – says until January 25th, but I don’t honestly see them lasting that long.  My family put away all the groceries before I could say anything, but it was pretty much candy, gum and four half gallons of Horizon 2% milk.  If you’re looking for cases of Stride gum in Mom and Loverboy flavors, this is your store.  The creep factor in the former is off the chart:  Hey, dude, what’s your mother taste like…

They also have walls of Philadelphia cream cheese:  bricks, whipped, lite and regular – all plain (unflavored).  If you missed out on the Target candy clearance, you’re bound to find what you want over here!  I bought a few cases of Root Beer Float Extra gum (like you don’t have any vices).  Lots of Lean Cuisine Honestly Good chicken entrees, Mrs. Smith pumpkin pie, Safeway pumpkin pie and Safeway ice cream and lots of different containers of whipped toppings (including a 5 lb box of vanilla-flavored topping). Found one of the non-dairy chips for Rachel – very bad cell reception, so this is a secret...shhhhh

Still had lots of vitamins and heath care products, but even at 75% off…

Stopped in at Walgreens and picked up the Topricin and Bach rescue pastilles plus a 2L of Dr. Pepper for First Born.  Used two $8 RR and the $1 mfr coupon plus 35¢ – – got back a $10 RR and a $6 RR.  Should be a good week… fyi, the $1 coupons I printed out four to a page wouldn’t scan…good thing I brought along Big Bertha (takes up an entire page). 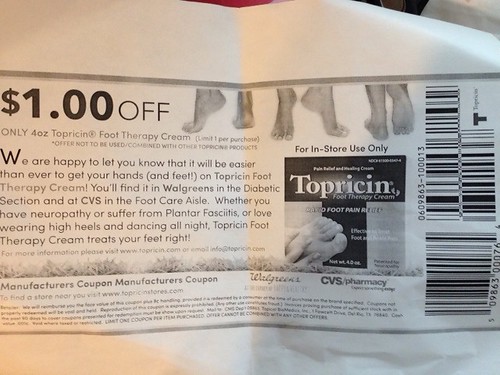 First stop was Staples for my weekly pick up of free paper.  Completely out of stock.  They sold out on Saturday (people coming in all day) and said some stores sold out even earlier in the week.  Told me the warehouse is currently out of stock.  I’ll check back later in the week, since it’s not likely I’l run out before then. bwahahahahaha

Wanted to check out the remaining inventory at the Dominicks on North Aurora Avenue.  Locked up tight.  However, it’s very possible that the store I’ve always thought of as the North Aurora location isn’t – and the store on Eola is the one they’re talking about.   It’s certainly not worth driving around to check.  If any of you have more info, please post.  I would pick up more organic whole milk and eggs.  Or any of the still-open Dominick locations, for that matter! 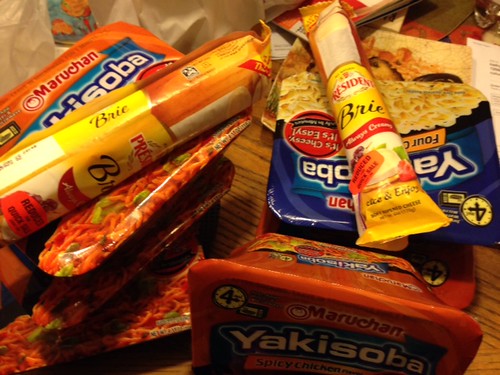 Jewel has, once again, the Yakisoba noodles for 99¢ BOGO.  Use the 50¢ coupon from 1/12 S for more free noodles!  Remember that Jewel registers won’t accept two coupons on the BOGO, nor the 2¢ in overage even though it is in the Jewel coupon policy, so watch that darned thing and make sure you get credited. Cashier said “Didn’t you buy about a million packs of noodles last year?”  Lots of clearance cheese left over from the Holidays – I grabbed a couple of brie tubes for $3 each.  I also grabbed what I thought was $1 pineapple in the 9 oz cups – was marked $2.49, but figured it was just a weird pricing error.  Turned out to be mango, not pineapple and frankly, even if it were $1 I wouldn’t buy mango that color!  also turns out i can’t read ’cause it said mango on top… 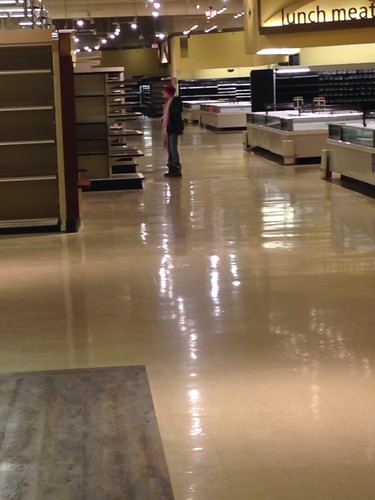 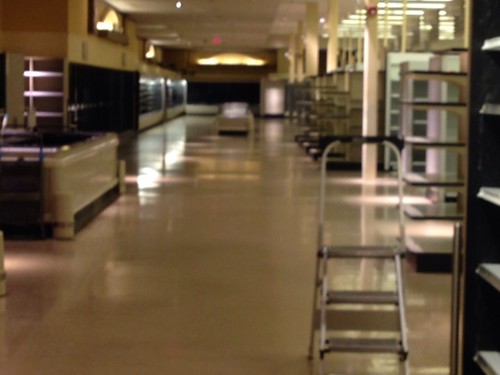 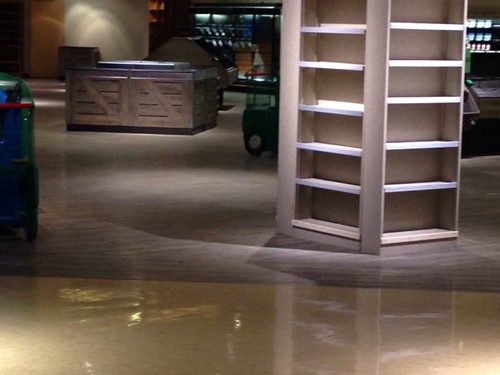 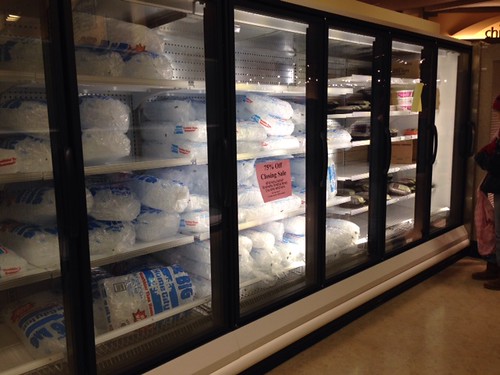 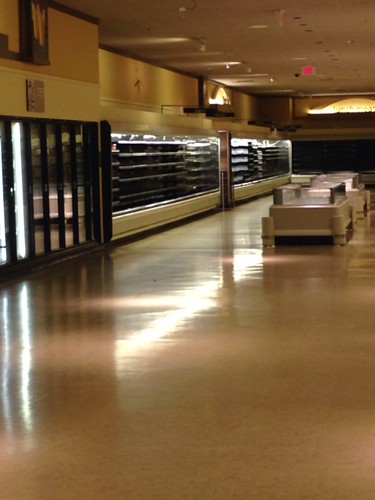 The only thing left in the freezer section is ice – pretty much a given when it’s well-below freezing in Chicago.  These were shot at multiple Dominicks locations. 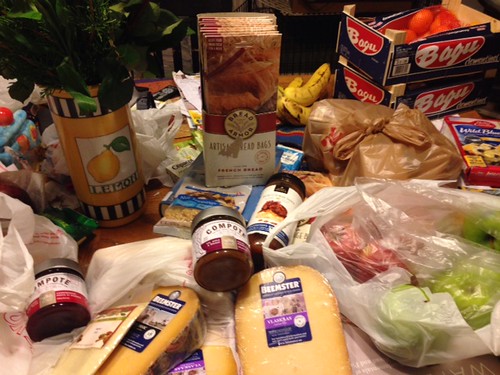 Naturally I was still able to find something! The smoked Gouda cheese was only $2.50 after the 50% off price – big old wedges of cheese!  I never even knew they had these artisan Bread Storage Bags and since I still love playing around with dough, these will come in handy to keep the loaves from drying out or getting mushy.  I picked up very fresh Fuji and Granny Smith apples for a buck a pound and a couple of jars of Compote.

So that’s it for Dominicks in Chicagoland. Safeway has to leave the stores in broom-swept condition for the new owners – may I suggest a place to store that broom? 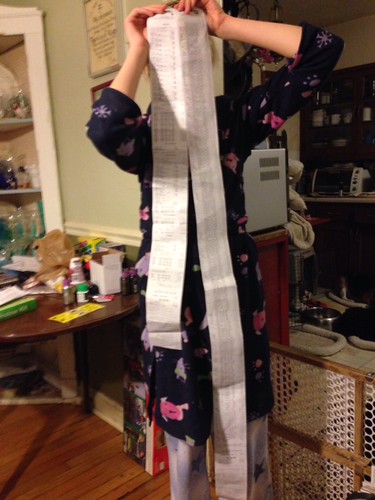 How serious am I about stocking up? My first time out of the house in four days and I cancelled my standing mani/pedi appointment to spend the afternoon at Dominicks.  This is turning into one of those Greater Love than this stories…

I was planning on hitting up the Downers Grove store first, then Woodridge, but I literally had no room left in the car – way past blind spots!  I was hoping to confront that nasty old carp, Mary, who takes pleasure in causing embarrassment to customers.  Why she’s been kept on so many years I don’t know.  Apparently she was yelling about all the customers yesterday, how they’re all vultures and where were they before and they’re the reason Dominicks is closing.  Um, then I guess you never read Safeway’s track record as a bottom feeder extraordinaire, Mary.  I was hoping to tell her she was probably one of the reasons people stayed away and the only thing that would make me happier than seeing her without a job would be to see her in the parking lot with Roman candles shoved up her a** (look ma, no swearing!).

Alas, she wasn’t there but when I checked out, I told the cashier how sorry I was for all of them except one.  He asked and I replied, then told him of my plans for her heinie.  He laughed and said a lot of people there felt like that.  A weird note:  both the cashier and bagger said they’d never seen such long receipts before.  Now I feel guilty for not shopping there more often, ’cause my freebie receipts always look like that!

Since I didn’t want to break or freeze the register, I broke down my cartloads into two transactions, shown in the photo.  Total number of items was 311 and my OOP was $202.68.  I really hate spending money, but a HUGE number of those products were sparkling waters in all flavors for which I spent 20¢ a 1L bottle.  I only got a few frozens ’cause I’m already getting dirty looks around here.  Many, many canned items, like veggies and soups and asceptically-packaged fancy soups.  Case of the small cans of sliced black olives (for olive bread), small case of Crystal Light.  Some stuff for Rachel, whose store was completely bare (I swear I didn’t stop there first!).  Even those huge food service size cans of menudo I got ended up only $3.25 each.

I’m up to take a bath – so until later…  Hey, I’d love to know:  what have you guys been finding and where?

Independent grocery chains affiliated with the Centrella cooperative are in negotiations to buy as many as 10 Dominick’s stores, sources familiar with the talks said.

Grocers affiliated with Centrella, the brand name used by Joliet-based Central Grocers Inc., are looking to purchase stores as a group in both the city and suburbs, sources said. It’s unclear which Dominick’s locations Centrella would buy on behalf of its member firms.